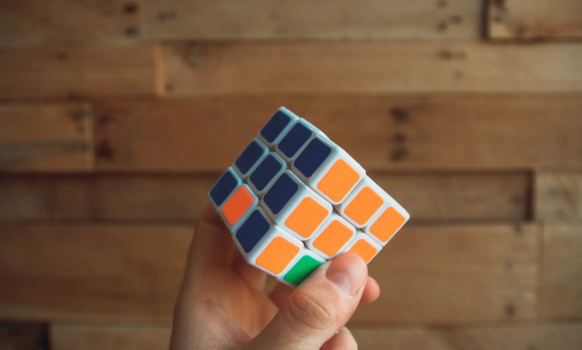 There are several methods that can be used to solve a Rubik’s cube, but the exact sequence of instructions for solving this 3-D puzzle can be perplexing even to the experts, depending on how the cube is scrambled up at the time you try to solve it.  A Rubik’s cube has approximately 43 quintillion possible permutations, so if you just try to just rotate the faces randomly, it may never get solved.  This rotatable mechanical cube is a three-dimensional solid object that has 6 faces, 12 edges, and 8 vertices, which are the corners.  The 6 faces means that there will be 6 different colors and the edges are where the different colors will meet.  If you look at a corner on the cube, you will see three different colors which are known as layers and no matter which way you hold the cube you will always see three layers.  Each face will have 9 different blocks and the one in the middle is known as the center block.  Unlike the rest of the blocks, they do not move position, because they are fixed and they determine the color of the face.

There is a thing called God’s Number which is the smallest number of moves needed to solve the 3x3x3 Rubik’s Cube from any random starting position.  Programmers have determined that every standard 3x3x3 Rubik’s cube can be solved in a maximum of 20 moves from any starting position, no matter how it is scrambled.  There are two ways to turn a layer, either regular or inverted.  A regular turn is a clockwise turn, and an inverted turn is a counterclockwise turn.  In Rubik’s cube notation, an inverted turn is represented with a lowercase i, such as Ri.  This would mean that you rotate the right side counterclockwise.  A Rubik’s cube algorithm is an operation, or a series of rotations, that reorients the blocks into a desired outcome.  These are usually written with a capital letter denoting the face that should be rotated, a lowercase i if that rotation should be counterclockwise, and a number 2 if it should be rotated twice.

It shouldn’t matter what layer you solve first, but it is a good idea to solve one layer, before you go on to try and solve the rest.  The video below starts off with the White face and it illustrates how to make a white cross.

Once you have made the white cross, then you make the white corners and you have your first face completed.  Solving a Rubik’s cube requires a lot of practice and memorization and I have never been able to solve one, but if you keep at it, it is possible, as some three-year-old kids have solved them.  It is intricate, but if you are dedicated, have patience, and are willing to practice, eventually you will be able to solve one.  Even mathematicians have a hard time trying to solve a Rubik’s cube and they call this an NP-complete problem, which applies to any of a class of computational problems for which no efficient solution algorithm has been found.  Sheer persistence and luck will help as well as developing your own techniques by rotating blocks around and possibly undoing moves if things don’t work out.  Most people are not great at thinking in 3-D, but you can’t just look at the front, as you have to be aware of what is happening on the other sides.

Instead of looking at the cube as being 6 faces, it might work better if you see it as being 3 layers, which seems to work for a lot of people.  When Trinity kissed Neo, he came back to life, emerging as The One and this may be the perspective that works for you, but some people can actually solve these when they are blindfolded.  The beginner’s method contains 6 or 7 algorithms that need to be repeated in some cases, to obtain a desired permutation and some direct algorithms can get you to a desired stage.  The algorithms are a sequence of predetermined turns represented by the cube notation shown in the table above, that you use to get from one desired stage to another and learning them is the key to resolving the Rubik’s cube.

Written for Reena’s Exploration Challenge #196 using the photo prompt above.