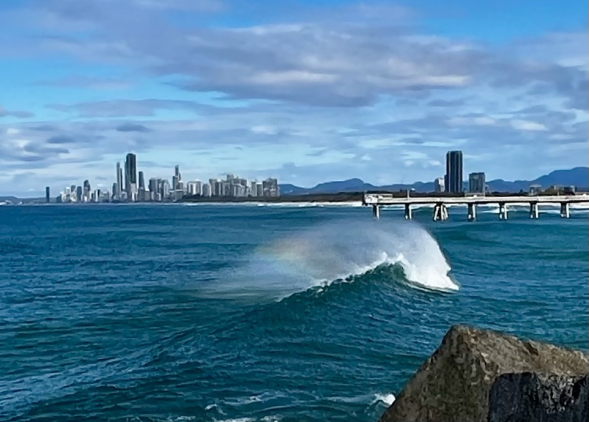 Jake asked, “Mommy why is there a rainbow on top of that wave?”  Cheryl, Jake’s mom responded by saying, “It is interesting that you mentioned that, as the rainbow is formed by sea spray which is blown from the tops of waves by the wind.  The ocean is full of waves, but you don’t notice the ones that are out in the deep water all that much, but as these waves approach the shore, they get propped up by the sand underneath and this makes them more noticeable.  An odd thing happens as the water moves closer to shore, the bottom of the wave catches on the sand and the top starts to fall over.  The bottom of the wave is prevented from moving forward because it has hit the wall of sand, however the top of the wave continues forward.  This is like what happened to you the other day when you walked from the hardwood floor in the hallway into the living room which is carpeted, and you caught your toe and tripped forwards.”

Jake said, “Wow, I never thought about waves like that before, but that still doesn’t explain the rainbow.”  Cheryl said, “I may have gotten off topic, so let’s get back to the sea spray, which is also known as spin drift and basically it is a collection of tiny air bubbles.  The spray drifts in the direction that the wind blows it and here the wind is blowing into the wave, so the spray is seen behind it.  I think that nature is a beautiful thing and I see the wind carrying your dreams over the sea where they can be kissed by the white waves along the shores, producing rainbows above the foam.  Sorry, as I went off topic again recalling something that I read by the poet W. B. Yeats.  Rainbows can occur anywhere where when light meets water in the sky, and the angles are conducive.  As the waves break on the shore, they eject multitudinous water droplets, and these particles from the ocean become aerosolized as a fine mist.  When these water droplets hang in the air and sunlight enters the droplet, some of this light will reflect off the back side of the droplets and pass again out the front.  As sunlight passes twice through the water, the different wavelengths that make it up, will bend at different angles, which splits the entering white light into the spectrum of rainbow colors.  It is that simple.”

Jake said, “I think I get it now mommy, but who is W. B. Yeats?”  Cheryl said, “You are not ready for Yeats yet and kids say the darndest things.”

Written for Mindlovemisery’s Menagerie Photo Challenge #423 hosted by weejars aka Sarah where today she is using a photo by Darrell Whiley.