Steven was weary from constantly searching the horizon, and he thought maybe his eyes were playing tricks on him when he saw… his dog Biscuit was running toward him.  Biscuit had been gone for the last three days and Steven was happy that he was OK.  This happened before and it will probably happen again, as once Biscuit catches the scent of a nearby female in heat, that becomes his entire focus, he stops eating, aggressively marks his territory, and becomes increasingly obsessed over tracking down the female dog in heat throughout the duration of her cycle.  During a female dog’s heat cycle, things often get pretty darn crazy, as the male and female tend to stir each other up in a hormonal frenzy.  Male dogs can detect pheromones and hormones produced by a bitch in heat from over a mile away. 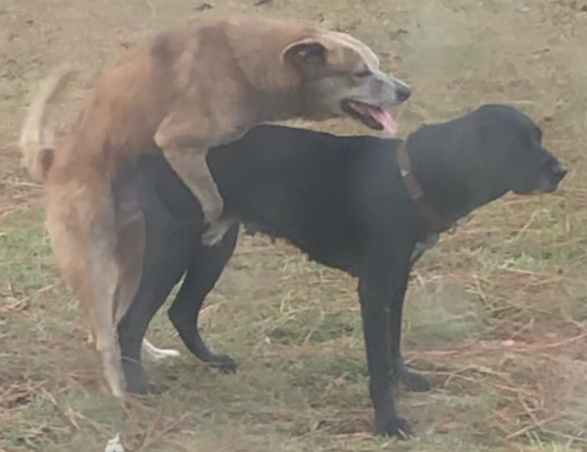 Biscuit is usually a very mild-mannered dog, but when he detects that scent, a sense of urgency overwhelms him and he will do just about anything to get to the potential girlfriend.  The last time he ran away it was very embarrassing, as he jumped up on a picnic table in the neighbor’s backyard and dove through a screen window to get at a poodle.  Steven felt ashamed that his dog broke the screen, and a lamp in the neighbor’s living room, but she was a really nice lady and Steven paid for all of the damage.  Dogs are different from people, as we choose a sexual partner for a long-term relationship, while dogs think with the primal mindset of instant gratification.  If a dog desires pleasure, especially a male dog, it will follow its natural instinct and pursue that pleasure.  The call of the wild increases his yearning to mate, but Biscuit really loves people and this shows when Steven leaves him alone while he goes to work, as when Steven gets back Biscuit always shows his affection.  I guess it is only natural for him to get lonely, but Steven decided that one dog was enough responsibility for him, as he couldn’t allocate and devote time to another.  Steven knew that if this running away continued, that he might have to consider neuter castration for Biscuit, as he loved him dearly, but he didn’t want any lawsuits because of this behavior.

7 thoughts on “Dogs Will Be Dogs”