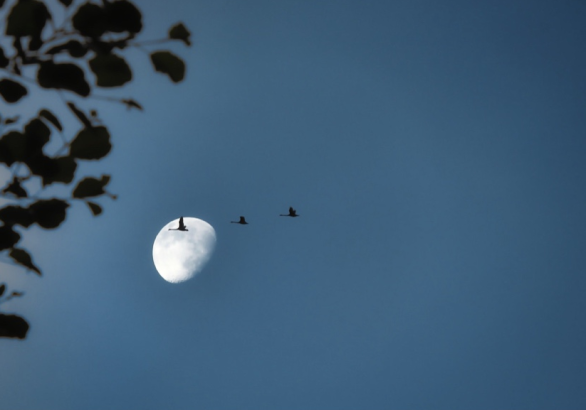 Roy said, “Look at those three cranes flying past the waning gibbous moon, isn’t that a lovely sight this evening?”  Rachel replied, “Are you sure those are cranes and how do you know that is a waning gibbous moon?”  Roy said, “Their long necks, long legs, and very broad wings tell me that they are cranes and because of their shorter beaks, they are not herons, egrets, or storks.  Although you may think of me as a lunatic, I am sort of an expert on the moon.  Everybody knows that the first man on the moon Neil Armstrong said, ‘That’s one small step for man, one giant leap for mankind’, but I actually wrote the words for the second man Buzz Aldrin when he stepped onto the moon.   Most people think he said, ‘Wow, it really is made out of cheese’, but he actually said, ‘Beautiful view. Magnificent desolation.’

After a full moon, the moon starts becoming less illuminated again, waning toward the last quarter moon, then finally, another new moon.  This is the last day of the waning gibbous moon and we have been in this phase with 56% illumination since December 1st, so tomorrow we will get to 45% and be in the last quarter.  Gibbous means that the observable illuminated part of the moon is greater than a semicircle and less than a circle.  Like the Earth, half of the Moon’s surface (the day side) is always illuminated by the Sun.  However, as the moon orbits the Earth, the sunlit portion that can be observed varies through the course of the month as the Moon moves around us.

There is no such thing as moonlight, as what you see is actually sunlight reflecting off the moon’s surface.  Our moon doesn’t generate any light, it only reflects the light from our Sun which makes it change its shape every 29 days, 12 hours, 44 minutes, and 2.8 seconds as the moon will go through its 8 phases.  Moon phases represent the names given to points in its orbit around Earth.  Each phase lasts for only an instant as the moon is constantly moving.  Starting out from what is called a new moon, (the first moon phase which is when the moon’s surface looks dark because the illuminated side is facing away from Earth) the moon appears to grow in the sky gradually increasing in magnitude or extent and that is called waxing.  This second phase of the moon is called the waxing crescent, where crescent refers to the curved shape similar to a banana or a pastry.  The next moon phase is called the first quarter and this term seems misleading to many, as half of the moon’s disc is visible from Earth due to the light from the Sun.  This occurs approximately one week after the new moon.  The moon continues to become the waxing gibbous, the full moon, the waning gibbous, the last quarter and then the waning crescent.  As Mr. Miyagi said, “Wax on, Wane off”.

The primary phases of the Moon cycle are the new moon, the first quarter, the full moon and the last quarter.  To the naked eye, the full moon lasts about three days, but in reality, it is a full moon for just an instant before it begins to wane.   Since the phase cycles of the Moon are almost always shorter than a full calendar month, (February being the exception) the phase of moon that occurs at the start of the month usually occurs again before the end of the month.  As a result of this, every 2.7 years, the full moon phase will occur twice in the same month and this is known as the Blue Moon.  In an astrological sense, 2.7 years is not an irregular occurrence, but the phrase, “Once in a blue moon” is used for something that rarely happens.

It is easy to determine a new moon, a full moon, a crescent moon and a gibbous moon, but if you have not been watching it growing or shrinking, then it may be hard to figure out what phase it is in.  The Moon goes around the Earth from West to East, so the side illuminated by the sun will move across the face of the Moon from West to East.  The Moon rises in the east and sets in the west, but it goes across the sky a little slower than our Sun.  The Sun marches across at 15 degrees per hour, while the Moon is moving at 13.5 degrees, so even they are both going the same way across the sky, the moon is losing ground.

Written for Sadje at Keep It Alive What Do You See? Picture prompt Image credit– Lolame @ Pixabay.

9 thoughts on “The Waning Gibbous Moon”