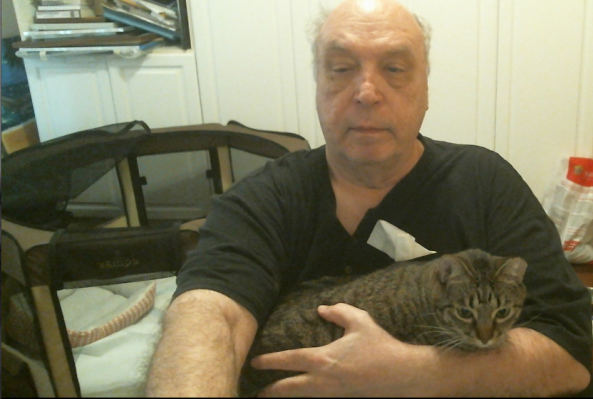 Boggy thinks that she belongs to me, even though there are four cats in this house and they all belong to my cousin.  Yesterday I noticed that her eyes change color, most of the time her eyes are brown like her fur, but when she goes out by the pool, they turn the prettiest shade of green.  Boggy is being retrained to act more like a cat, as she went through a period where she didn’t use the litter box, but she is much netter now.  We got this tent (shown in picture above) which she had to be put in every night and it became my job to lock her in.  She is the fattest cat in the house and my cousin says that Boggy is too heavy to pick up and her boyfriend is not able to bend all that well.

Boggy seems to enjoy being in the tent, but she also likes the game where I have to chase her around and she runs and hides before I am able to catch her.  My bathroom was under construction recently and I had to check into a motel for a week and my cousin asked me to take Boggy with me.  We bonded and she has become very attached to me.  Since we got new flooring here, Boggy has been staying in the computer room and she has not had an accident in the past two weeks, as she is using the litter box again.  I am hoping that Boggy will soon have free rein of the house again, but that is up to my cousin and of course how well Boggy continues to behave.

Written for Linda G. Hill’s Stream of Consciousness Saturday where the prompt is to write about whatever is beside you when you read this prompt.