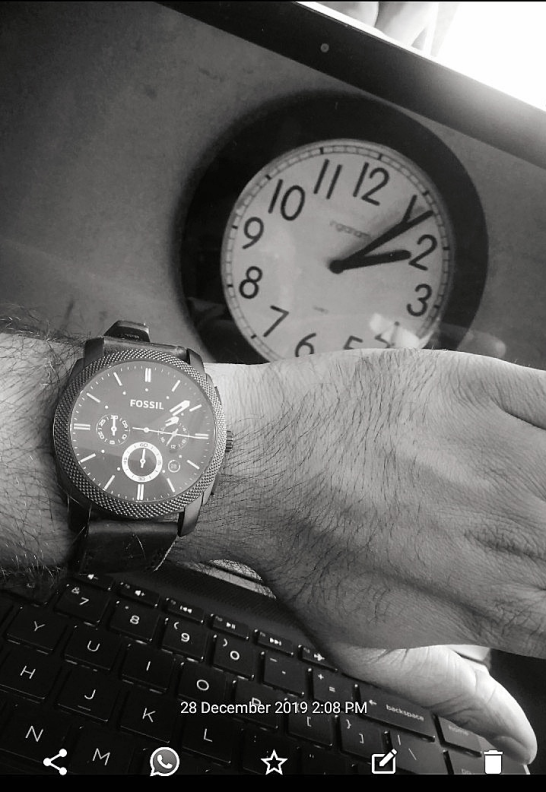 My wife gave me a new watch for Christmas and I am still learning how to use it.  I think that she saw me looking at it in my Diving magazine.  I got the Fossil Garrett Chronograph watch which is a 3-hand analog movement device, which also has a date indicator and some various extra features that go beyond just telling time and also make it look cool.  Many people are mystified by all the dials, but being a chronograph watch simply means that the timepiece can be used as a stopwatch to measure elapsed time.  It is multifunctional as in addition to its standard display capabilities, it incorporates three separate dials usually for hours, minutes and seconds, but I have the 1/20 second model, making it able to divide time into smaller increments down to five one hundredths or one twentieth of a second.  It contains 3 pusher buttons, that start, stop and reset the timer.  My new watch has a depth rating of 20 ATM, 20 BAR, 200 Meters, so it is splash resistant for hand washing, submersible for swimming, incorporates the ability to be used for shallow diving in case I go snorkeling and I can also wear it if I want to go scuba diving, but it cannot withstand deep sea pressures.

My wife has this uncanny ability to say things which are often repeated on TV seconds after and this is similar to the Baader-Meinhof (pronounced badder mainhoff) phenomenon.  This phenomenon occurs when the thing you’ve just noticed, experienced or been told about suddenly crops up constantly.  This happens when a person stumbles upon some obscure piece of information, that is often an unfamiliar word or name, and soon afterwards they encounter the same word or subject again, and it keeps on repeating.  The phenomenon which is also known as the frequency illusion or recency illusion, bears some similarity to synchronicity, which is the experience of having a highly meaningful coincidence, such as having someone telephone you while you are thinking about them.  When we are watching TV together, we encounter this phenomenon with such regularity that we actually anticipate it happening and I say, “You did it again”.  I wonder if destiny is calling for these events to happen, but then I realize that the human brain is always searching for patterns.

When I consider how much my wife talks, it does not seem all that odd, as she has diarrhea of the mouth and I think that she must be in love with the sound of her own voice as she is constantly blabbering about something.  Over the years I have learned how to tune her out, otherwise I would have gone crazy by now.  This watch that I just got kept popping up in TV commercials just before Christmas and my wife asked me if that was the same model that I was looking at in my Diving magazine.  I had never heard of this watch before, but suddenly it seemed to be everywhere.  My brother told me that he just got one.  I saw two guys in my office that also just got the exact same watch, and I started wondering why this was happening.  Was this watch suddenly starting to dominate the thoughts of everyone on the planet, or was my consciousness playing tricks on me?  My life seemed to be surrounded by this watch and it was coming out of nowhere.  A fair warning to all of my readers, don’t be surprised if the Baader-Meinhof phenomenon starts to crop up everywhere you turn.

12 thoughts on “How Weird is That”