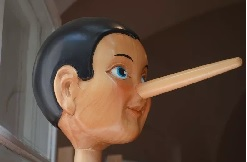 1. Why was Eric the Red called Eric the Red?
He came from the red side of the family and the other side had Little Boy Blue and Bluebeard.

2. Why did Christopher Columbus sail west?
He was lured by a mermaid.

3. Who were the Vikings?
Guys from Minnesota that play with the Packers, Bears and Lions.

4. What is a scullery maid?
The one who hangs out near the butler’s pantry.

5. What is a dumb waiter?
The one that is not the sharpest knife in the drawer.

6. How did British sailors earn the moniker, Limeys?
They put the lime in the coconut and mixed it all up.

7. How did U.S. troops earn the moniker, Yanks?
They started yanking everyone’s chain.

8. What is borscht?
A soup named after Boris Karloff.

9. Who were the Bolsheviks?
Trump’s ancestors.

10. What was the original purpose of the Great Wall of China?
That was constructed to keep out immigrants.

Written for Fibbing Friday hosted by PCGuy this week.