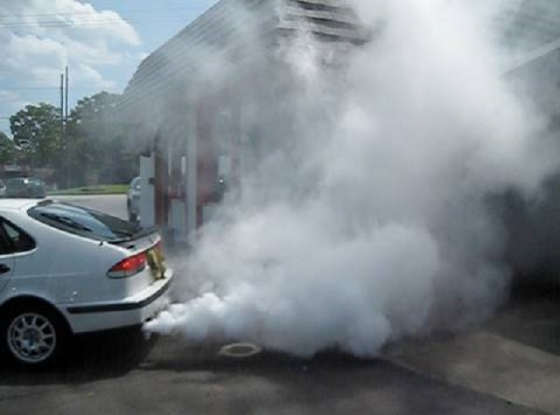 His car suffered a severe stroke in the middle of the road, and refused to move forward.  The check engine light had been on for the last several miles and the car was coughing up smoke like there was no tomorrow.  She was a real beauty in her day, but now she is 20 years old and just a memory of the last millennium, when cars didn’t have all of those electronics built into them and the computer management systems that makes them so unreliable.  Sure those newer cars have ability to think and they can even speak to you and tell you which way to turn, so you can get to your destination, but he was used to the way his old jalopy felt.  Over the years she has accumulated some rust, but her chassis is mostly sound, except for that droopy fender and her wobbly tail pipe.  He didn’t want to junk her and have her feel unloved and unwanted.  She has been good to him for many years and she should be rewarded for that, not left to suffer by being abandoned in a junkyard.  She is an utter wreck now and he should have added oil when the squeaky wheel called for it.  He pushed her into the service station and the car horn squealed to alert them that he had arrived.

Written for Mindlovemisery’s Menagerie Saturday Mix – Unique Personality, 27 July 2019 hosted by weejars aka Sarah where the prompt is to personify a car.

6 thoughts on “Under Her Hood”