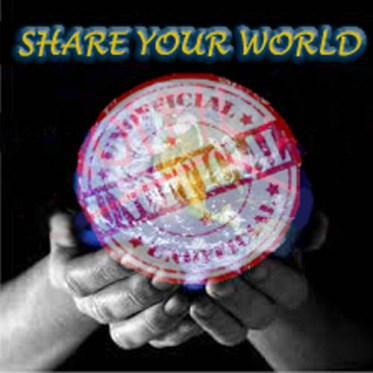 Cee Neuner from Cee’s Photography host of Share Your World weekly prompt, is on vacation, so Melanie, from Sparks From a Combustible Mind has stepped in as a guest host this week and Melanie said that the credit to goes to Willow for the questions.  I have never participated in this challenge before and I have no idea why anyone would want to know anything about me, but the questions seem easy enough to answer, so I will give it a shot.

Have you ever been in a food fight?

Yes it involved peanut butter and my sister’s friends.

How do you deliver bad news?

I usually start by saying, “Don’t shoot the messenger.”

What (if anything) do you think is beyond the stars?

I have this theory about the expanding universe and this energy force that started with the Big Bang which I will try to relate without mentioning Dark Energy or Dark Matter if you can stick with me.  A giant wave shot out in all directions and it keeps picking up momentum and nothing can stop it.  Most physicists feel that we are headed toward the Big Freeze (universe runs out of energy and all the stars die) or the Big Crunch (universe collapses into a massive black hole), but I disagree.  I feel that these waves (or more like one continuous 3 dimensional wave) at the outer edges of our universe is creating new mass as it crashes through the previous nothingness.

What “redneck” (unsophisticated) activity do you like to do?

The only thing that comes close is that a few times I have eaten food from a roach coach.

Is there a scary scene from a movie (or book) you viewed as a child that still haunts you?

I really can’t say that it still haunts me, but when I first saw the 1959 movie House on Haunted Hill, it was pretty scary. Frederick Loren (Vincent Price) is an eccentric millionaire who has rented a Gothic stone house on a hill overlooking Los Angeles for a “haunted house” party that his fourth wife Annabelle (Carol Ohmart) had decided to throw.  Over the opening credits, five people arrive at the house being driving in funeral cars.

Seal’s ‘Kiss From A Rose’ was the theme from which film?

I found this video, but I am not sure if it helps.

Thanks, Melanie for filling in and Willow for your questions.

5 thoughts on “Sharing My World by Answering Questions”