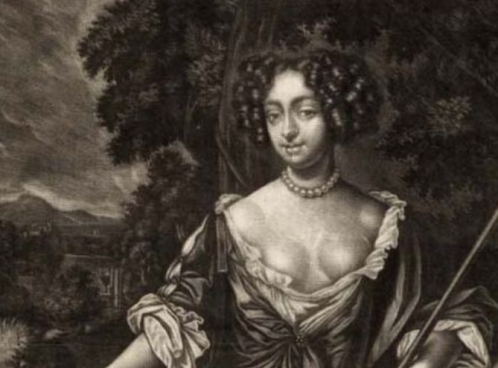 In the mid 17th century, the Thewles family migrated from Europe and settled along the Eastern seaboard of America from Newfoundland, to Maine, to Virginia, the Carolinas, and some even went to the Caribbean islands.  They moved deasil along the coast for years following the plentiful prey and living in harsh conditions. There is not much to note about their physical characteristics, except that most of them had red hair, which did correspond to their Irish ancestors.  The only other family physical characteristic that was observable is that almost every one of the women were ample-breasted, having big boobies that were nicely shaped.

Julie Thewles was the envy of most of the men in her town.  She was far from being ostentatious, but she did know how to flaunt her assets.  She understood that human lifespan was finite and she felt that the human body is a thing of beauty and thus she should not have to hide it.  She effectively used her breasts to attract attention and hopefully snag a possible mate. She knew how to play her part to get ahead of the game by bearing just enough cleavage which went a long way to scintillate the fantasies of the men in this town.  She was also good at laying a trap and playing her role without having to pressurize anyone in this soon to be sexualized world, where the women were not yet objectified.  One day when her boyfriend Bronsky came over and they were fooling around, her top was torn and that is when the motor boat was invented.  You know when you stick your face in a woman’s breasts and shake your head back and forth really fast while going burrrr.

Julie decided that her life was not going to be drab any more.  This stellar decision was going to change her life forever.  Her world would not revolve around trying to get a husband anymore, as she was going to postpone all of her thoughts about men.  This new line of thinking did not qualify her as being a philosopher, but it did give her a certain clarity, however that may have come from her giving up drinking whiskey during the day and switching to ginger tea.

Julie decided to go into business and she named it Breastoration, which she thought was a catchy name for a bra factory and store.  She would exhibit this new fangled contraption for all of the women in town.  If they were interested in her designs, than she would tell them to lean down, to make it easier for them to shove their boobs into it, then straighten up, and then pop their jugs, melons, cans, hooters, or knockers up, so they’ll show through the dress.  Julie even thought about adding a counterweight to the back of some of her bras which would get more lift for the more buxom ladies, who often complained about back problems, but she could never get that to work.

At first many of the townsfolk thought that Breastoration was just a hoax, but eventually many women did flock to her store.  Her customers found out that after buying her bras, that they were more likely to have a man smile at them, hold the door open for them and speak more kindly to them.  It was life changing, like having their birthday cake and getting a visit from the tooth fairy all at once.  This new store lit a fuse with the preacher who felt that it was his duty to give a sermon about how women should dress more properly, however deep down the preacher was nothing more than a shark, who always gave into temptation and enjoyed ogling any woman that would captivate his wondering eyes, whatever shape or form, be that plump, or round and even those women with smaller globes.