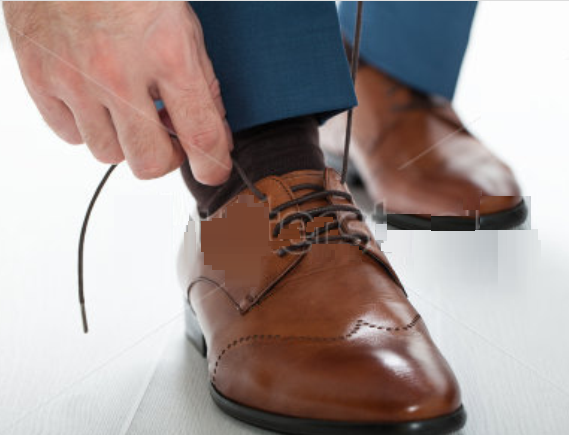 I was in Walmart the other day when I stepped on my shoe lace while I was walking, because it had become loose and it was dragging on the ground.  I understand that every step that I take while wearing my shoes exerts pulling forces on the loops, and the impact forces of my feet as my foot returns back to the ground causes the entire shoelace, including the knot, to undergo these vibrational forces and that is why laces come lose.  I know, it’s just a little thing, but when it happens, I feel exposed, not the same way as when my fly is down, but it’s more like an accident is waiting to happen.  Since I did not want to trip and fall flat on my face, I moved over to the side of the isle where I stopped and bent down and re-tied me shoe laces.

My head was down as I was tying my shoe, and my eyes were focused on my laces when I noticed something shiny on the floor near my foot.  This gleaming object caught my eye and my mind said, ‘What’s that?’.  It looked like a penny and something inside of me was telling me to pick it up.  This old rhyme came back to me, “Find a penny, pick it up.  All day long, you’ll have good luck.”  As I finished tying my shoe another thought entered my brain that I should not pick up any pennies that are tails side up, as they would only bring bad luck.  I think that you are supposed to turn them over to head side up and leave them for another person to get the good luck.  A closer inspection revealed that this was a foreign penny and I did not know if I was looking at the head side up or vice a versa and whether or not this penny superstition even applied to foreign pennies anyway.

I picked it up and I examined it closely and discovered that it did not have any writing on it at all.  It had the face of a lion on one side and on the other side a guy was riding on a camel, I decided that it was cool, so I stuck it in my pocket.  I thought that I would give it to my daughter when I got home and then I started thinking about something that my wife said the day that we were getting married which was, “Something old, something new, something borrowed, something blue, and a lucky penny in my shoe.”  I thought that maybe I could save this penny and give it to my daughter on her wedding day.  The lion side was up and I figured that this was heads for this coin.  I finished up my shopping and I was going to head home.

As I approached my car in the parking lot, I saw something on my windshield, which I assumed was an advertisement flyer, so after I loaded my packages in my car I grabbed it and started reading it.  It was a note that said, “I am sorry for bumping into your car, as my kids were screaming in the back seat and I sort of lost control.”  That was it, no name, not contact information, just a sorry.  I went around to the other side of my car and saw a slight dent and scratch marks and some red paint there, which made me assume that the driver that hit me had a red car.  I went back into Walmart to talk to the security people to see if they had any cameras placed in that part of their parking lot, which they didn’t.  They said that they would review their footage of the rest of the parking lot to see if they could identify any red cars with dents in them and then they would get back to me.  I had insurance, but my deductible was $250 and my dent was not all that big, so this was just going to be an aggravating hassle for me.

When I got home my six year old daughter Jenny gave me a big hug and said, “Daddy my tooth fell out and I am going to get money from the tooth fairy.”  I said, “That is great honey.”  I told my wife Doris about the fender bender and I showed her the anonymous note that was left on my windshield and she said, “What kind of person would do something like that?”  We decided not to get the insurance company involved and I drove down to the body shop to get an estimate which came out to $275, so I made an appointment for next week.  We had a nice dinner together and the Jenny went to bed with dreams of the tooth fairy in her head.

Doris told me that Jenny’s best friend Melisa told her that she got twenty dollars under her pillow when she lost her tooth.  I was a bit aggravated over the car and I said, “We can’t go around trying to keep up with the Jones, as at $20 a pop for her twenty teeth that will cost us $400 and I remember that I used to get a quarter when I lost a tooth.”  My wife said, “Even the tooth fairy has been affected by inflation.”  I told my wife that I had five Sacagawea dollar coins that I could put under our daughter’s pillow and that I had found this real cool penny that I would put there also.  My wife said, “Make sure that you do not wake her, because you don’t look much like the tooth fairy.”

I waited several hours before I snuck into Jenny’s room and to my surprise, someone was standing over my daughter when I got there.  I grabbed them by the back of their neck and threw them to the floor and jumped on top of them and then they said, “Cool it, I am the tooth fairy!”  I let go and she said, “How can you even see me as I am supposed to be invisible.  No one has ever seen me before.”  I said, “I am sorry, I did not know.”  My daughter woke up and the fairy waved her wand and a cloud of fairy dust was spread around the room which put my daughter back to sleep instantly.  The fairy disappeared and I went back to my bedroom to tell my wife what I saw.  My wife thought that I was teasing her and she said that she wanted to go back to sleep, but before she did she said, “Did you take Jenny’s tooth and leave her the money?”  I realized that in my haste I had forgotten to do both of these things, so I grabbed a twenty dollar bill from my wallet and went back into Jenny’s room and put it under her pillow and I grabbed her tooth.

I had weird dreams all night long, but I woke up refreshed and headed off to work the next morning.  Around 10 AM I was feeling hungry, so I headed over to the snack machine to see what was good in there.  I had some change in my pocket and I fished out two quarters and bought a Snickers candy bar.  Reaching back in my pocket, I realized that I still had that odd penny which I had found the other day.  I took it out and I started rubbing it between my fingers and then this rage came over me and I marched into my boss’ office.  I grabbed him by his shirt collar without saying a word to him and he said, “I am sorry, I guess your wife told you.”  I had no clue what he was talking about and he went on saying, “I don’t know what came over me at the Christmas party last year, but you fell asleep and you wife Doris and I, um well it just sort of happened. We just kissed, that’s all I swear and we both realized it was wrong and we promised to keep this secret.”  I said, “I am sorry for grabbing you and it won’t happen again, but stay away from my wife.”

I went back to my desk to reflect and I knew that things had gotten out of control ever since I picked up that penny.  My car got hit, I saw the tooth fairy and almost killed her and then this thing with my boss, I realized that I had picked up a bad penny and I needed to get rid of it real soon.  I went out for lunch that day and I walked past a homeless man who was holding out a cup begging for change.  Perfect I threw all of my change into his cup including that unlucky penny.  Things seemed to have settled down after that going back to normal and then a few days later I saw that same homeless man on the street, but he had new clothes on and he wasn’t begging for money any more.  When he saw me, he ran up to me and hugged me and told me that he bought a lottery ticket with the money that I gave him and he thought that he won because I had given him a lucky penny.