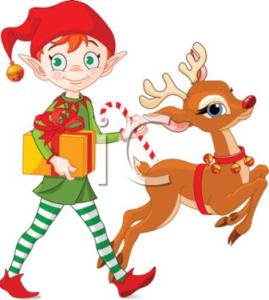 Elves are the most important part of Christmas, as they make all the presents for billons of people, and that’s a lot of work. Santa’s Elves are diminutive magical green and red-clad creatures with rosy cheeks and pointy ears.  They wear pointy hats and they help Santa bring Christmas to life and do many other tasks throughout the year, however Santa gets all the credit on Christmas morning for the presents.  Elves design and make toys and gifts for children, look after the reindeer and keep the sleigh in good condition.  They keep Santa’s naughty and nice list in order, and guard the secret location of Santa’s village, which is very close to the North Pole.  All of those letters that are written to Santa are given to the elves to read, so they can figure out what type and how many presents they will need to make, and Santa ends up getting all of the milk and cookies.

The Elves live with Santa and Mrs. Claus and the reindeer.  Santa does not really do too much, besides taking care of his cute cuddly reindeer, and putting together the Nice List and the Naughty List.  Santa may be in charge of the reindeer, but the elves have to clean up after them, groom them, feed them and even train them.  Santa’s elves are good friends with all the fairies and the gnomes around the world and they utilize them as Santa’s secret agents in order to get detailed reports of their findings on whether or not the children are behaving well and obeying their parents, so they can pass these details on to Santa for his lists.  All the elves cheer when they hear reports about children being good, because then they know that they will be busy making toys.  Children who are reported to be unkind or those who misbehave will have their stockings filled with lumps of coal, or perhaps they may get onions as presents.

Santa spends most of his time working on getting his big jolly belly into a nice round shape, which means that he sleeps, eats and drinks a lot, while Mrs. Claus bakes him pies, cakes, cookies, and other pastries and the elves do all of the work.  Mrs. Claus looks after the elves and she makes sure they eat their fruits and vegetables and not just cakes, cookies and candies. One lucky elf will get to tag along with Santa every Christmas Eve and while the jolly big man is putting presents under the tree, this elf will fill up all the stockings that are hanging up.

It’s always cold and there is always plenty of snow at the North Pole, but the Elves never get cold, so they can go around only wearing those red and green little elf shirts and tights!  Their elf clothing keeps them warm and cozy, because over time they have adapted and they also drink a lot of hot cocoa with marshmallows.  The Elves live for a very long time in tiny their colorful cottage houses and they decorate their houses with candies and gingerbread and their Christmas lights are on all year round.  Elves have cute names like Candycane, Cinnamon, Cookie, Cupcake, Eggnog, Garland, Giggles, Glitter, Gumball, Holly, Jingle Bell, Mistletoe, Noelle, Peppermint, Pudding, Ribbon, Sparkle, Sugarplum, Tassel, Tinsel, Tootsie, Trinket, Trixie, Twinkle and Yule Log.

The busiest of all the elves is named Elvis and he works at the advice stand where he tries to help all the other elves with their problems.  Today Winkie came to ask Elvis if she had to wear a green and red outfit to the Christmas party and Elvis told her that green and red colors are only required for work and since this was a party that she could wear whatever she liked.  Buddy came in later and told Elvis that he was kicked by Prancer again and Elvis told Buddy that he had been warned repeated never to walk behind Prancer and that he must pay more attention when working around the reindeer.  Elvis reminded Buddy to always make sure that he is wearing his sunglasses whenever he works with Rudolf, as he did not want to hear about him getting blinded again.

Rosie stopped by for advice on how to wrap a basketball and a skateboard.  Elvis’s day ended with Penny dropping by to discuss how poorly her son Buster was doing in School.  After a long discussion Elvis said that Buster would have to start taking Ritalin and it might be best if he started using a fidget spinner to calm his nerves.  Penny was worried that the Ritalin might stunt Buster’s height and Elvis assured her that it would be OK as he always dispenses the same advice to all the parents of troubled students.  Penny was still not sure that she was getting the right advice for her son, but she did realize that the solution that was provided to her was exactly what she paid for and nothing is given so freely as advice.

4 thoughts on “Nothing Is Cheaper Than Free Advice”