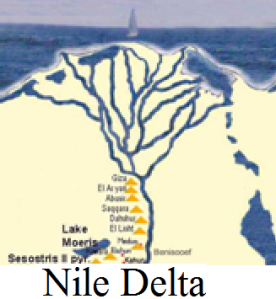 The Nile is the longest river in the world, beginning near the equator, stretching north for approximately 4,000 miles from East Africa till it empties into the Mediterranean Sea.  Without the Nile, Egypt would be nothing but desert, because the region receives very little rainfall.  The Nile has provided Egypt with fertile land since ancient times, allowing one of the greatest civilizations of the ancient world to develop.  The Nile was the bloodstream of Egypt as it ran through a valley five hundred miles long, bordered by cliffs in some places and by flatlands in others.  Egypt received a yearly inundation of rain storms and melting mountain snow every year from June to mid-September which caused the Nile River to flood.  The Nile river would rise every summer, burst its banks and flood the whole country making Egypt look like an ocean as water stood above the fields and saturated the soil.  The Nile overflowed its banks each summer, no matter how little rain fell in Egypt.  In May the Nile River reached its low point and from June to August the river rose rapidly.  In the middle of September the river reached its highest, and by October the Nile’s water level began to decrease.

When the water drained, the hills emerged first than the lower lands appeared again with many puddles of water in areas of the flood plain.  The water was soon absorbed in the soil and the Egyptian farmers planted their crops in this muddy area.  The water of the flood left a layer of fertile sludge of rich volcanic topsoil which covered the fields in the fertile Nile Delta.  Egypt relied on this silt (fertile mud) to fertilize their crops and it was famous for being the most fertile country of the world.  The Nile River consists of three major waterways which includes the Blue Nile, the White Nile and the Atbara River.  The White Nile originates in Lake Victoria in present-day Uganda, and the Blue Nile and the Atbara River originate in the highlands of ancient Nubia (present-day Ethiopia).  The Blue Nile and White Nile join in what is present-day Sudan to form one river, then the Atbara River joins that river about 200 miles farther downstream.

In the Ethiopian highlands before the Nile River flows into Egypt, it passes through six rapids called the Nile Cataracts.  Stone cliffs and boulders force its waters through narrow channels causing the water to flow more swiftly and become rough.  The rushing water forms waterfalls and rapids which are called cataracts. The first cataract marked the southern boundary of ancient Egypt.  The yearly floodwaters began upstream, then they run down past the Second Cataract towards the First Cataract, careen around a bend where kings would one day be buried, and thunder towards a flat plain where the river finally falls away into a dozen streams called the Nile Delta.  The Nile Delta is the delta that is formed in Northern Egypt where the Nile River spreads out and drains into the Mediterranean Sea.

The Nile Delta covers an area stretching about 100 miles from north to south and about 150 miles from east to west.  The entire delta has a very low elevation, enabling the land there to remain wet long after floodwaters recede.  Many areas within the delta remain swampy year-round.  Because of its great size and abundant water supply, the Nile Delta has always had more fertile land than the Nile Valley.  The Egyptians measured time by the Nile river, dividing the year into three seasons, Inundation (flood) Season, Planting Season and Harvest Season.  This seasonal cycle of  flooding, planting and harvesting gave a pattern to Egyptian life.  To take advantage of the annual flooding of the Nile (the inundation) the Egyptians built irrigation channels to carry water into the fields and dams to hold back the water for use during droughts.

When the Nile flooded there was plenty of food for everybody, which included grain, herbs, fruit and also meat, fowl and fish.  This annual flood meant the difference between feast and famine.  If the Nile rose too high, then many things could be destroyed and even people and animals might be swept away by the raging waves of the flood and drown.  The Ancient Egyptians held a big festival every year to celebrate the Nile River flood because they thought this flood was caused by Isis, an Egyptian goddess, when she wept a tear drop.