In 1800, the American inventor and engineer Robert Fulton designed and built one of the earliest submersible crafts in France which was commissioned Napoleon.  Robert Fulton created, his “plunging boat” or “diving boat” named the Nautilus to sneak up on and destroy enemy war ships by attaching his torpedo to their hulls.  He believed that this fearsome vessel was a real weapon of destruction because it was able to creep under the hulls of other ships and attach an exploding powder charge to them.  Fulton figured that this would be so appalling and atrocious that nations would stop attacking each other and this would end all of the naval war that was taking place at this time.  Fulton’s submarine was a turning point in Naval warfare, as it allowed invisible attacks by a few people to destroy larger warships by introducing stealth to naval warfare and providing the explosive torpedo. 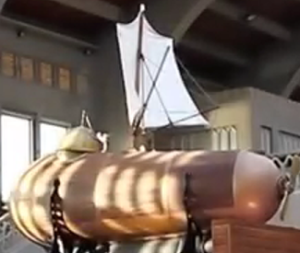 The Nautilus was made out of copper sheets studded to an iron rib.  It was 21 ft. 3 in long and 6 ft. 4 in wide.  It was sort of cigar shaped, looking like a bloated or a pregnant cigar, because it’s height was bulged.  It did not have a straight or flat top and bottom, the diameter was not constant, as it was greater near the hatch that was located in the front and it did taper toward each end.  It had a pointed front end, while the rear end of the vessel was circular shaped and this is where the propeller was attached.  When the boat was above water, it had a sail and it looked just like an ordinary boat.  The kite-like collapsible sail was used when it was on the surface to provide propulsion.  A crank was used to collapse the sail and then retract it flat onto the vessel before diving under the water.

It featured a conning tower that also served as a hatch and an observation dome, and it included a periscope.  The Nautilus was powered by a hand-cranked screw propeller when submerged, its turning ability was controlled by fins on the stern of the vessel that were also hooked up to hand cranks.  When submerged ventilation was provided by a snorkel tube that connected to the surface, but it also carried flasks of compressed air that permitted a small crew to be submerged for several hours.  Buoyancy was controlled by allowing more or less water into a chamber which we know today as a ballast.  These ballast tanks flooded and emptied to change her depth under the water.

This was not the first ship designed to go under water, but this vessel could be used to place powder mines on the bottom of warships, somewhat like a torpedo.  Although the Nautilus did perform well during testing, it wasn’t fast enough to engage nimble ships that moved with the wind and tide and also they could see it coming and were able to move out of the way.  The program was eventually cancelled and Fulton broke the submarine into pieces and sold it for scrap.  Robert Fulton and his crew descended to a depth of 25 feet making the Nautilus the first practical submarine.